C Is for... at the Visions Art Museum

California Fibers' member Charlotte Bird currently has an exhibit with Cathy Denton at the Visions Art Museum in Liberty Station, San Diego, California. The show is running through January 19, so the holiday season is a good time to stop by and see their collaboration if you haven't already.

The basis of the exhibit began when the two artists wondered what would happen if two artists whose names begin with the letter C opened the dictionary to words that begin with C, closed their eyes and pointed to a word on the page, and then created a work of art from the definition? This long-distance collaboration became C is for…, combining the talents of these two multimedia artists who have interpreted their "C" word definitions in cloth. 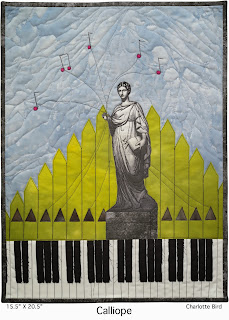 When the two artists imagined the exhibition in 2011, their goal was for each to create one small art quilt per month for 15 months. Now there are 15 sets of quilts, each set interpreting a different word that begins with the letter "C." The artists set the rule for themselves that they couldn't throw any words back and they each had to use the same word for that month.

Charlotte Bird's art quilts, one seen above, incorporate her hand-dyed and silk-screened cotton fabrics, which are constructed with hand-cut and fused appliqué, machine-quilted, and hand-embroidered. Their dimensions range from 12x11 inches to 26x20 inches. 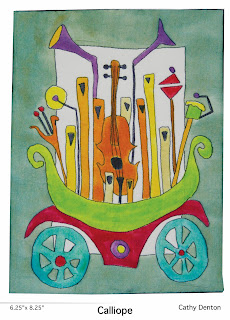 Cathy Denton's art quilts are hand-painted, machine-quilted silk. Four quilts were drawn in Photoshop® and printed with a pigment printer on a variety of fabrics. Her diminutive quilts range in size from 6x8 inches to 10x13 inches.

Both artists infuse their work with much whimsy and humor. No two interpretations are alike. This exhibit is running concurrently with the Del Thomas Collection exhibit at VAM, both worth a first and second view.

Posted by CFblogger at 8:05 PM No comments:

In Remembrance of Artist Ruth Asawa

San Francisco Artist Ruth Asawa died at her home on August 6.  She was 87.

Ruth was a student at Black Mountain college from 1946 - 1949 and she studied under Josef Albers.
In the 1950's her use of wire combined with looping was considered very daring and a new form of experimentation with materials.
"I was interested in ... the economy of a line, making something in space, enclosing it without blocking it out.  It's still transparent.  I realized that if I was going to make these forms, which interlock and interweave, it can only be done with a line because a line an go anywhere." Ruth Asawa, The sculpture of Ruth Asawa, Contours in Air, University of California Press

California Fibers would like you to meet our new members, Brecia Kralovic-Logan,
Lori Zimmerman,  and Lydia Tjioe-Hall.


Posted by CFblogger at 8:10 PM No comments:

California Fibers' members will be meeting today to vote on new members, who will be featured here in the months to come.
Posted by CFblogger at 12:19 PM No comments:

An occasional series featuring an interview with one of our members

My mom taught me to sew when I was 8. She was a weaver and she sewed, so I’ve been surrounded probably since birth. I spent my college years doing photography, ceramics, screenprinting, and etching, but most of these were too expensive post-college, so I focused on screenprinting. I started taking quilting classes in my early 20s, but didn’t apply that knowledge to my art until my first child was born. Screenprinting required these big blocks of time to make and clean screens. You couldn’t just stop in the middle to feed a hungry baby. Fabric could be done in little chunks and carried onto the soccer field and to piano lessons. It just happened from there.

What about the medium of fiber appeals to you?
Touch. Drape. Making an image with all these different colors that work much differently than ink or paint. Depth.

What is the greatest pleasure you get in your work?
Having time to get lost in it. The brain when it’s making art is much happier than when it isn’t.

What is your biggest challenge as an artist?
I don’t have enough time. My job as a teacher sucks up huge amounts of time, and I’m a single mom with two teenagers. I don’t sleep much. I wish I could work more during the school year, but it’s a difficult balance. If I spend too much time making art, the work side suffers and vice versa.

What is your creative process?
I draw a lot. I have a small sketchbook that goes many places with me, especially out to dinner. I draw in that. Sometimes I pull out the big sketchbook late at night, when I’m done grading papers or when I don’t have the energy for anything else, and I draw. Sometimes something pokes me in the brain enough that I need to draw it out. Sometimes the entire drawing will create itself in my head while I’m driving, and I’ll have to hold it there until I have time for pen and paper. Everything starts as a line drawing. I enlarge that and then number the pieces. I trace them all onto fusible web and then cut those out. I iron each piece onto fabric and then trim all of those down. Putting the quilt together is like making a puzzle…I iron them together using the drawing underneath a Teflon sheet, and then that gets ironed to a background. I stitch them down and then quilt, usually using a dark outline thread for the parts I want to emphasize, and then quilting the background in an all-over pattern to make the images pop. Sometimes I use ink, embroidery, or beads to embellish the piece, but usually I expect the image to be the most important part.

Why did you decide to become a member of CF?
I was looking for more opportunities to show my work outside of the quilt world, which can be quite insular and traditional at times. My work sometimes gets in trouble in the quilt world…with images that would not cause issues in the art world. I am more an artist than a quilter.

Does California, as a locale, physically or an idea, emotionally, manifest itself in your work?
I grew up here. I’ve lived here almost all my life. I think it would be hard to say that it doesn’t show up in there, in the way I think, which must be much different than how I might think if I had grown up in say Wales or South Africa. That said, I’m not sure how I would explain exactly what makes me a Californian artist.

Who would you like to critique your work?
I’m not really into critiques. By the time I show my stuff to people, I’m committed to it. I take full responsibility for it. I don’t really want to involve other people in that.

What is your biggest fear as an artist?    Going blind.

What tool could you not live without?
Black Sharpie, extra fine. Paper would be nice too, but I could make do.

Posted by CFblogger at 4:22 PM No comments: